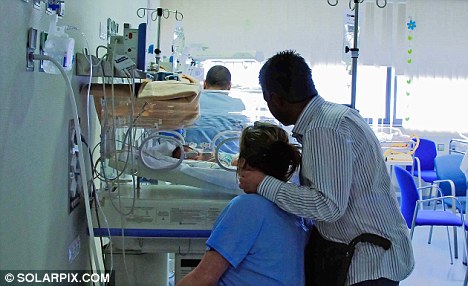 Battle: The couple with their son in Spain, before he was taken into care, have won the right to battle the decision for their eldest daughter to be adopted

Social workers behaved like officials in 'Stalin's Russia or Mao's China' in attempting to remove children from loving mothers, senior judges have said.

They warned that social workers in two separate cases tried to put children in foster care without giving their mothers a proper chance to prove they were fit parents.

Their actions risked fuelling public perceptions that social workers are 'arrogant and enthusiastic removers of children from their parents', Lord Justice Wall said.
Sadness: The couple - who cannot be named for legal reason - gaze tenderly at their baby son through the glass

Battle: The couple with their son in Spain, before he was taken into care, have won the right to battle the decision for their eldest daughter to be adopted

In one case, Devon County Council was attempting to remove a baby from his teenage mother because social workers believed she had a habit of forming relationships with dangerous men.

But Lord Justice Aikens warned that social workers were effectively saying to the mother: 'Whatever you may do doesn't make any difference - we are going to take your child away.'

He added: 'That is more like Stalin's Russia or Mao's China than the West of England - that is the impression you give.'

In a separate case, Lord Justice Wall criticised the 'shocking' failure of social workers in the London borough of Greenwich to support a mother seeking to break free from an abusive relationship to win back her two children, who are in care.

He said the case would do little to dispel the public perception of social workers in care proceedings as 'trampling on the rights of parents and children' while removing youngsters into 'an unsatisfactory care system'.

The judge, who will today be sworn in as president of the High Court's Family Division, becoming the most senior family law judge in the UK, acknowledged that social workers were often 'damned if they do and damned if they do not'.

But he insisted they had a clear legal duty to 'unite families rather than separate them'.

His criticisms will feed public fears that social workers, in extreme cases, behave like 'child-snatchers'.

There are concerns they sometimes break up families too readily and can be prejudiced against parents for frivolous reasons.

In the Devon case, social workers believed a teenage mother, known in court as S, was unfit to care for her baby boy, H, because of her tendency to form relationships quickly with potentially dangerous men.

Social workers said the father of her first child had been violent and the youngster had already been adopted.

They argued that her new baby should also be placed in foster care and eventually adopted.

But a county court had previously ruled the mother should be allowed a final assessment to see if she was fit to keep the baby.

The council disagreed and went to the Court of Appeal last week seeking to overturn the directive.

'Local authorities don't seem to understand that the public perceive them as pre-judging cases of this nature,' he said.

The judges stopped short of saying the mother should keep her child, insisting only she should be given a fair hearing.

Lord Justice Aikens said there was no evidence the mother had maltreated her baby in any way - or evidence that the violent father of her first child would have anything to do with baby H.

He went on to condemn social workers' 'Stalinist' actions. The council has now withdrawn its appeal.

A council spokesman said: 'This is a difficult and complex case in which the county council's first priority had to be for the welfare and protection of a vulnerable child.'

In the Greenwich case, a mother known only as EH was seeking the return of her five-year-old son, R, and daughter RA, two. They had been taken into care in January 2008 after doctors discovered her daughter's left upper arm had been broken in three places.

Medical staff believed it was not accidental and a judge later that year concluded the children's father, who had a history of violence, was responsible.

Since June last year, the father had stopped having contact with the children, while the mother remained 'steadfast in her commitment' to them, the judges said.

There was 'abundant evidence that she is a warm and loving mother'. But social workers in Greenwich were accused of failing to support her attempts to break contact with her violent ex-partner.

Lord Justice Wall said the conduct of social services was 'hard to credit'.

The court said Greenwich should give the mother more support and review its attempt to have the children adopted.

The two cases will further rock public confidence in social services following the Baby P scandal, where social workers failed to spot signs of serious abuse and allowed themselves to be manipulated by unfit parents.