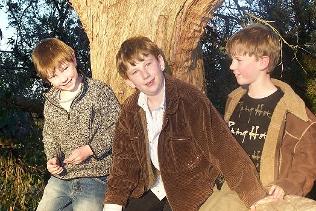 Hayden, Cameron and Liam Skeer have been returned to their father.

THREE boys who have spent the past eight months on the run with their mother have been found.

The boys, aged 10 to 14, were returned to their father, Paul Skeer, after he made a heartfelt plea in the Sunday Herald Sun last week.

Authorities were alerted after a reader saw the story and recognised the family in the Queensland town of Childers.

It is believed they had been living there since they were taken by their mother, Tonya Skeer, last July.

Another child who was featured in the exclusive story - toddler Marley Tattersall - was also returned to his mother during the week, after his father, Michael, came forward in Caboolture, also in Queensland.

South Australian father Paul Skeer said it was an emotional trip north to collect his boys.

"I had to borrow money from family members to make the trip up there.

"The kids had no clothes. They need beds, clothing, the bare essentials. It's going to be hard but I'll do my best to provide for them.

"I'm determined to give these kids a better life."

New South Wales mother Jessica Dempster is also making the most of her second chance at motherhood with her son, Marley, 2.

The boy was presented at the Caboolture Police Station by his father, Michael Tattersall, who took the child on a trip on May 14 last year, promising to return him the following week. He didn't.

Ms Dempster was ecstatic when told of the news on Sunday.

"It's just fantastic to finally have Marley back," Ms Dempster said.

"It's been an agonisingly long wait, but I never gave up hope that he would be found.

"I would like to thank the public and the media for all of the help they have given. Without their assistance Michael would never have felt pressured into turning himself in."

But one "stolen" boy, Ben Jones, 12, wrote to the Sunday Herald Sun through his father's lawyers saying he wanted to live with his father.

"I am writing to you 'cause you haven't been told everything that has happened," he said.

"My dad has his lawyer. I have my lawyer and they are in contact with Mum's lawyers so I am not hiding. I just want to have my say."

The only child not located was Katelyn Lewis, 10, who has not been seen for more than nine months.