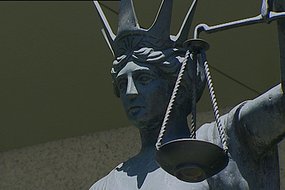 A Brisbane jury two took just an hour-and-a-half to acquit Susan Falls.
The family of a man who was drugged and killed by his wife four years ago say they will not stop until they get justice.

Susan Falls, 42, admitted she gave her husband a curry laced with sleeping tablets before shooting him twice in the head, after years of domestic abuse.

A Brisbane jury two took just an hour-and-a-half yesterday to acquit the Caloundra woman of murder and the alternative charge of manslaughter.

Three men who helped Ms Falls to dispose of her husband's body were also found not guilty of being accessories.

"I am totally disgusted with the legal system in this case; we have been let down beyond belief," he said.

"Me and my family will be doing everything in our power to make sure that justice is served in this case.

"We have been betrayed by the prosecution and the police in this matter; the legal system has truly failed us.

"She shot her husband dead, admitted to it and is still not going to jail. How does that work?"

Leave a comment on F4J below and to leave your point of view on the Life Matters Feedback Click Here.

10. By:Bewitched from Vic, Australia on June 8, 2010 @ 4:42 pm
Did this guy have kids to this woman? If not, maybe that's why he got the bullet. Maybe she got really angry for wasting her time and not havin kids which is what a woman's primary purpose obviously is.

By:Stan the MAn from Queensland, Australia on June 8, 2010 @ 4:03 pm
A Justice of the Peace once told me two areas to keep well clear of was the Medical and Legal Industry. No surprises there I guess altho too late for most of us ay

By:Little John from South Australia, Aus on June 8, 2010 @ 4:03 pm
Whilst we don't know all the facts surrounding this case, it's still bizarre nonetheless. As Horace mentioned "DOUBLE STANDARDS" seem to be what's happening. In a world where women want equality & in may cases more it desnt make much sense that women murder & get off scott free, where a man could do a far lesser crime and get double figure prison terms. *Shaking head in disgust*

self-defence, but as you say, this was premeditated. The problem with

sample of it. Like any small sample of a broader population they can be

representative or biased. In this case the jury reflects the greater

opinion in the public that it's okay to kill men, because they can take

it and in fact, it's probably suitable to kill them in some cases

because they are violent and have earned it, and left their victims no

choice. The fact that this idea exists in the public at large is a

reflection of years of indoctrination by the domestic violence industry.

By:Horace L from Vancouver, Canada on June 8, 2010 @ 4:03 pm
Possibly what can be gleaned here is that how the feministic push is well and truly infiltrating the legal system all around the world. Maybe this is a good thing, however it may also mean turning the world upside down. But hey who am I to argue with this New World Order of stripping men down to their bare bones. Guess I should be grateful after my ex took me to the cleaners - I still have a shirt on my back and get to breathe air still. Pity I cant say the same for the guy in this story. If the roles were reversed the man would be doing 20+ yrs without a doubt. Double standards are rife at the moment. Anyway keep up the good work lads :)

By:BigJoe from Victoria, Australia on June 7, 2010 @ 10:58 pm
Yet another story, in yet another day, to men and people who will forget all about this in yet another day, that another life has been lost, another set of male/human rights down the drain, and yet only a few who ever say anything about it, let alone do anything. Everyone, tries to keep secure, forget and dismiss the dreamworld they live in fearing and hoping they never get targeted and can avoid the misery so many others go through. Is this the human nature of self preservation or simply apathy?

By:lostinspace from vic, australia on June 8, 2010 @ 4:03 pm
Anybody expecting to get justice in the legal system will often be disappointed. Sloppy lawyers & clever tricks will often influence naive juries yo get the outcome they wish.

By:Rambo from NSW, OZ on June 8, 2010 @ 4:03 pm
Susan Falls didn't fall in this case now did she. Bloody angry at this sort of crap. Yeah definitely agree about hunting season open on men. Maybe they will bring guns back just for women, as long as they promise to use them on men only!! Totally fucked...

By:MrNatural from Vic, Aust on June 8, 2010 @ 4:03 pm
What does everyone think of women killing men and not going to prison?

Does not drugging a man before shooting him multiple times constitute premeditated murder, deserving a death sentence or life in jail?

Whatever happened to simply leaving the husband, as we are all so used to?

If this gets acceptance without resistance it will be truly over for men, fathers and your sons as they grow older into adulthood.

Forget the Family Court and Child Support Agency, you won't be around to worry about things like that.

What the hell is going on?

Hunting Day on men has officially been launched!

For everyone else it's called leaving.

The Women's Domestic Violence Industry is so huge and well resourced that there is no excuse for a woman not having support and protection to leave.

Simply this is pre-meditated murder and the death sentence for this woman should have been handed down.

A man drugged and then shot multiple times. Simply amazing!

Whatever happened to getting away, driving or walking, ringing for help, the doctor, or the other hundreds of support people on hand.

There is no justification for this sort of behaviour nor should it be tolerated by the community.

This is simply setting up a precedent and opening up the flood gates for women to kill their husbands, or men in general.

Over time the defence standards will be lowered that a women's perception or fear at any time will be enough to kill when they desire, knowing full well as long as they have some form of excuse they will be let off.

This is the wrong message to be sending to women and the community.

Whilst F4J and people can feel sorry for this woman's perhaps awful ordeal, what about the man? How will his children and family feel?