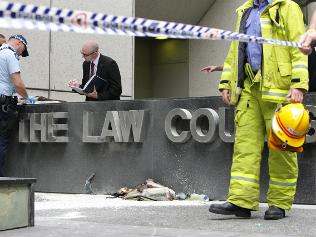 POLICE investigate the scene outside the Brisbane law courts after a man set himself alight.
A MAN is believed to have set himself on fire outside of Brisbane's iconic Supreme Court complex after an unfavourable family court decision, according to witnesses at the scene.

The incident happened just after 2pm after the man, believed to be in his 40s, had been sitting in front of the iconic marble Law Courts sign for some time.

Witness reported hearing a bang and seeing flames as would-be rescuers ran to the man's aid.

Emergency workers at the scene say the man is in a critical condition - with burns to 90 per cent of his body.

Sources investigating the incident said the man had earlier been at the Federal Courts for family matter and may not have received the outcome he was after.

Two witnesses, Kylie Pannel and Kylie Beard, who were both close to tears, said they could not believe what happened just 3m from them.

"He said absolutely nothing,’’ Ms Pannel said. "He was so quiet it wasn’t funny."

The incident caused inner-city traffic chaos for more than 90 minutes as up to 15 emergency vehicles crowded into George St to get near the scene.

By:Skeptik from Auckland, New Zealand on July 10, 2010 @ 10:50 am
Several interested folks in NZ have been following events following this tragic suicide.
See here ->

We are appalled that there has been NO follow up in the Australian media about who the man was, his background and circumstances. Scary!
From our periodic scouring Oz online news we see the Oz media hasn't even given his name!
It's frightening to think a man can do this yet be so totally ignored. We are convinced that if it had been a woman suiciding in such spectacular fashion it would have been a journalistic follow up frenzy. If anyone reading this can offer any more information please visit the MENZ site and comment. That way we may all get some closure and move on.
I've asked members of the MENZ site to keep a thread about him alive so that the issue doesn't sink into total obscurity. I invite folks in Oz to do likewise.
Commiserations to friends, family and associates of the poor man. May he rest in peace.

By:Daveyone from London, England on June 11, 2010 @ 11:10 pm
What will it take, Mr.Rudd, for you to act?
Jim Bailey in NZ brought this to my attention yesterday and I suggested this news item should be rolled up and inserted into Rudd (Key and Power too)where the sun never shines I have written to all 3 in the past month what will it take to get the message across and for action to stop almost 11,000 Australian citizens taking their life because of the family law farce and when you multiply 11,000 by the number of people touched directly or indirectly, that represents a fair proportion of the Australian population!

By:Noel from Vic, Australia on June 10, 2010 @ 7:40 pm
This is fucking tragic man wot happened to this dude? This will be kept quiet just like the FREEMAN case you watch!