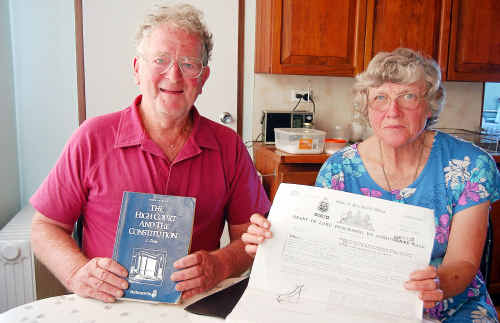 Terry and Claire Martin of Dorrigo are refusing to pay their rates to Belingen Shire Council.

LIKE Darryl Kerrigan, the much-loved screen character who defended his rights to the hilt, a retired Dorrigo dairy farmer is backing himself for a stoush in the High Court.

Terry Martin, 75, owes around $20,000 in unpaid rates – and he has no intention of paying Bellingen Council.

“I know I’m old and I know I’m cranky but that’s because I also know that I don’t have to pay council taxes,” he says defiantly.

‘Council taxes’ is what Mr Martin calls rates and he is so sure of his understanding of the Constitution, he says he hasn’t paid any to Council for the past four years.

Mr Martin is a member of an informal group which goes by the name ‘Concerned Dorrigo Landholders’ which in turn has a loose affiliation with other property owners across the country who argue that local government has no constitutional power to collect rates.

“Only the Federal Government has the power to collect taxes and that is all that rates are.

“The power of taxation is determined in the Australian Constitution of 1901 but the constitution doesn’t recognise local government and so council and the State Government do not have that power. It’s all there in black and white for anyone to read.

“Council might argue that rates are a fee for service but on my place on Snows Road, I don’t get town water, sewerage or garbage collection, so I don’t believe there is any justification for me paying these taxes.”

Mr Martin said he was last week summonsed to appear in Bellingen Local Court and bring along his financial records because he had not paid his rates.

“But I got there and the court house was closed. I waited from 8.30 to noon and so am wondering what that was all about.”

“I’ve already taken the issue to the Supreme Court but the judge said I had to take my matter to the District Court. However it now seems that the Supreme Court can’t find my case file and therefore can’t transfer the details to the other court.

“If need be I’ll go all the way to the High Court.”

Mr Martin isn’t the only landholder in the Bellingen Shire to have failed to pay their rates, although it is unsure how many defaulters share his strong convictions.

The incidence of unpaid rates in the Bellingen Shire at June 30 last year was 12.3 per cent, more than double the State average.

The council is currently undertaking a blitz to recover $1.2m from defaulters. The Council’s general manager Mike Colreavy would not discuss Mr Martin’s circumstances but said all landholders were required to pay rates to provide services and infrastructure for the whole community.

“Our current intensive recovery action is all about ensuring the burden of funding community needs is shared in balance by all landholders,” Mr Colreavy said.

“The legislation does enable us to sell land when rates are not paid for five years but that is a last course of action that all councils are reluctant to take.”

That power would seem to set council on a collision course with Mr Martin.

“There is no way they are going to sell me up to recover my debt. They don’t have the constitutional power to collect rates or to confiscate my private land,” Mr Martin said. The group ’Concerned Dorrigo Landowners’ can be contacted via email at abundanceorg@bigpond. com