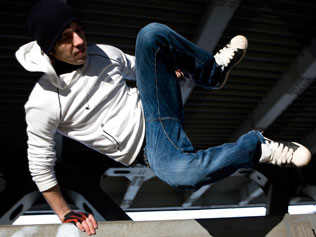 A SUPREME Court judge ruled today that a person who is not under arrest is entitled to do a runner from police seeking to question them.

Justice Stephen Kaye said Sydney man Andrew Hamilton was under no obligation to stop and speak to police when they approached him after receiving a complaint over an unpaid restaurant bill.

The judge said that it was an ancient principle of the common law that no one has to stop and speak to police or answer their questions and there was no legislation in Victoria that alters that right.

"The respondent (Mr Hamilton) before being placed under arrest did not have any obligation to stop when requested to do so, or to answer questions asked of him," Justice Kaye said.

The judge dismissed an appeal by the Director of Public Prosecutions and made a costs order in favour of Mr Hamilton.

Mr Hamilton had a charge of resisting police thrown out earlier this year after a magistrate found it was not illegal for him to bolt and that he had resisted nothing.

It was alleged he ran from a Taco Bill restaurant in March last year after an argument about an unpaid $136 bill.

Justice Kaye said that in the appeal against the magistrate's decision, the DPP argued that the Crimes Act imposes a duty on a person to state their name and address to an officer if it is believed on reasonable grounds they have committed an offence.

But the judge said it was conceded the police who tried to stop Mr Hamilton never got to the stage of asking for his name and address because he bolted.

"(The Crimes Act) does not contain any provision which expressly empowers police to detain a suspect , or take a suspect into custody, for the purposes of questioning the suspect," Justice Kaye said.

"The conferring of such a power on a police officer would be a substantial, and indeed radical, detraction from the fundamental freedoms which have been guaranteed to the citizen by the common law for centuries."

The court heard that when approached by police in Collins St, Mr Hamilton, 24, ran and was chased on foot and in a squad car.

Ignoring police sirens and calls for him to stop, Mr Hamilton - who was later cleared of responsibility for the restaurant bill - was eventually arrested near Flinders St station.

By:Mick from Vic, Australia on November 28, 2014 @ 8:16 pm
"A private citizen is under no obligation to reveal his identity to police officers where the circumstances are such that the latter have no reasonable grounds for believing that the citizen had committed or was about to commit an indictable offence and where the police apprehend him in such a case in order to determine his identity they are guilty of false arrest and imprisonment.

Even where the police arrest without warrant on a reasonable suspicion that the person apprehended has committed or will commit an indictable offence they must inform him at the time, if it is possible, as to why he is being arrested and their failure to do so will make them liable for false imprisonment. In either of the foregoing cases the person so arrested is entitled to resist such unlawful arrests."

By:John Hilden from SA, Oz on July 12, 2014 @ 5:57 pm
Under the thousands of Statutory laws (color of law) the composite governments simply attach 'criminal penalties' to their Administrative law to force compliance.

How many people would have a Drivers License, Mandatory Insurance, Business License, Building Permit or the myriad other Permits/Licenses if there was no threat of going to jail for violating the Statute?

The fact of the matter is that governments have, through unlawful conversion, changed Common Law Rights to Government granted 'privileges', all subject to the whim of the State.

Further, asking for and obtaining a Statutory License of any kind automatically grants Jurisdiction and nullifies the 'right' for which the License was obtained in the first place.

Under the terms of a any License contract, failure to uphold any provision of the 'contract' constitutes a breach thereof and one is automatically guilty..intent need not be proven.

Criminal penalties tied to a Statute means that you are going to jail, even though no crime has been committed.

Under Common Law, there can be no crime unless there is a victim. Absent a person being a provable threat to the life, liberty or property of some INDIVIDUAL (not the alleged Peace and Dignity of the Corporate State), the government/law enforcement goons have no business getting involved.

The Statutory scheme, contrived by BAR critters, assures a constant flow of funds to the Cash Register Courts, Judges and of course, the BAR ambulance chasers. Its all about money and control, period!! As always, freedom is the real victim.

By:John Hilden from SA, Oz on July 12, 2014 @ 11:47 am
Part 2: (cont from below)
Even if you ignored all the above and submitted (bend over and cop it up the arse:-) to their fraud - you are still "committing a criminal offence" against the highest law of this land - the Australian Constitution and therefore accessory and accomplice to their criminal enterprise because,,,

You CANNOT lawfully, constitutionally, meaningfully, morally and conscientiously extinguish or dis-charge an alleged debt/tax (including your credit cards, mortgage:-) in excess of AU$20 in the Commonwealth of Australia without breaching (committing a crime) the Currency Act 1965, specifically Sections 9, 11, 16 and 22, considering that the highest denomination coin in common circulation in the Commonwealth of Australia is the AU$2 coin. Additionally, the conflict that exists regarding the face value of coins makes it impossible to value the Australian dollar. It is NOT constitutionally possible for the State Government, or any of its agencies, to demand other than gold and silver coin in payment of debts.

The Constitution is a "powerful shield" for us friends - it would really help if you knew how to "hold it?" Check out Larry Hannigan's Australia @ http://www.larryhannigan.com/ Larry has some excellent letter templates and empowering DVD's for our benefit. Take a peek at his page "Thinking Cap On PLEASE!!" and you will discover the difference between the ONLY "valid seal" of the Commonwealth of Australian Constitution Act 1901 and the "counterfeit seal" on the Criminal Code 1995 Act. This is the stylized seal of the private AUSTRALIA CORPORATION which has absolutely NO AUTHORITY..

Finally, unless there is a victim, injured party or violation of contract,,, “There is only ONE common law which applies to all living spirits and sovereigns and that is? We are FREE to do whatever we please so long as we do not infringe on the life, liberty, rights and property of another living spirit.”
﻿ ﻿ ﻿ ﻿ ﻿ ﻿ ﻿ ﻿ ﻿ ﻿ ﻿ ﻿ ﻿ ﻿ ﻿ ﻿ ﻿ ﻿ ﻿
My country is the world. My religion is to do good. - Thomas Paine
Its all good, Grant
Social Media Activist with Truthology Foundation Australia
1

VICTORIAN SUPREME COURT Judge RULES person is entitled to do a runner if NOT under arrest... Justice Kaye said it was an ancient principle of the common law that a person not under arrest has no obligation to stop for police, or answer their questions. And there is NO statute that removes that right. "(Mr Hamilton) before being placed under arrest did not have any obligation to stop when requested to do so, or to answer questions asked of him. The conferring of such a power on a police officer would be a substantial detraction from the fundamental freedoms which have been guaranteed to the citizen by the common law for centuries.” – Judge Stephen Kaye – Melbourne Supreme Court ruling 25 November 2011.

This is a huge “case precedent” which categorically states that; “If you are not under arrest you DO NOT have to stop or talk to the police.” You can only ever be apprehended or placed under arrest if you have committed a CRIME. “For there to be a crime there has to be a victim, injured party or a violation of contract?”

The PTB (powers that be/corporations) have absolutely NO jurisdiction over us UNTIL we "contract with them". ALL law is commerce. ALL commerce is contract... NO contract - NO case!! If there's NO crime (see above definition), NO contract - there is NO obligation and NO case and therefore there can be NO punishment/fine,,, so you just write and tell em so!! We have a right and indeed a "moral obligation" to stand up and fight against these unjust and unlawful acts and laws. “If we do not assert and enforce or rights – we have none.”

"An individual who breaks the law that conscience tells him is unjust and who willingly accepts the penalty of imprisonment in order to arouse the conscience of the community over its injustice is in reality expressing the highest respect for the law." - Martin Luther King jnr
﻿ ﻿
DO YOU KNOW WHY the Whitlam govt/law society REMOVED the Australian Constitution from ALL our schools and universities in 1975? Because they are deadly afraid of the peoples "Common Law" they DON'T want you to know that it is Constitutional TREASON and criminal FRAUD for ANY person to act as a Magistrate (agent for the CROWN CORP) in ANY court in Australia and YOU are accomplice to this fraud if you show up or appear before any magistrates/summary conviction courts because?