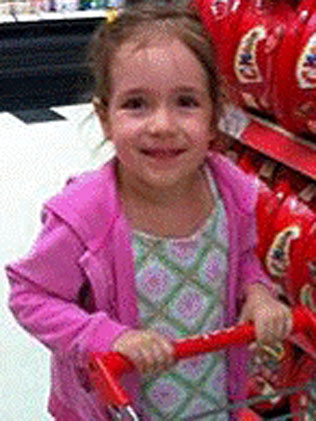 Queensland Police have issued an alert for Kyla Rogers, 5.

NSW Police are investigating whether the father of five-year-old Kyla Rogers ingested some sort of poison before he gassed them both in a car.

The bodies of Kyla, who celebrated her fifth birthday on Sunday, and her father Paul, 40, were found in a car just outside the town of Casino in northern NSW yesterday, after a double murder at Robina on the Gold Coast on Sunday night.

Police said the exhaust pipe of the 2006 model Holden Viva was connected by a hose to the vehicle's interior and early reports show Kyla and Rogers died from carbon monoxide gassing.

Hours earlier, Rogers is believed to have murdered Kyla's mother and partner at a unit on the Gold Coast. Queensland Police said the pair had been stabbed.

Police have defended the length of time it took to put out a child abduction alert for the Gold Coast girl yesterday, saying they believe she was killed soon after she was abducted by her father.

The local area commander at Richmond in northern NSW, Superintendent Greg Martin, would not say whether Rogers left a note before dying in the car with his daughter.

"It's probably improper that I flush out all of the details of the investigation through the media when it's the coroner that should be finding all this out first,'' Supt Martin told AAP.

But he said Kyla would most certainly have died first.

He would not rule out reports that Rogers had poisoned himself by some additional means, before connecting the vehicle's exhaust pipe to the inside of the car.

"That's obviously one of our lines of inquiry,'' he said.

"Because of the physical size of the child, we believe she succumbed to the gas poisoning whereas there's some evidence at the scene that the adult male hadn't quite as quickly succumbed.''

Supt Martin said the unleading of petrol since the mid-1980s had made exhaust-fume poisoning a less effective method of suicide.

"The amount of carbon monoxide they produce is significantly less than the old leaded petrol cars,'' he said.

"In my experience, you could be dead in about 12 to 15 minutes from the old cars.

"But with the new cars it's pretty hard to kill yourself with carbon monoxide poisoning, particularly as a large adult.''

The bodies of all four people involved in the tragedy will undergo autopsies in Brisbane to determine the exact causes of death.

The search for Kyla began after the bodies of her mother, Tania Simpson, and a 33-year-old man believed to be her partner, were found in a unit at Robina on the Gold Coast.

Neighbours in Robina said they heard screaming coming from the Arbour Ave apartment during the night but the bodies of the couple were not discovered until about 8am yesterday.

Tania's father was worried when he could not raise his daughter and went to the unit to investigate.

Inside he found the body of a man and called police, who found his daughter's body.

Police said there were clear signs of a struggle and there appeared to be a blood trail leading from the apartment, the Gold Coast Bulletin reports.

The unit block was put in lockdown, with residents confined to their homes and the shopping precinct was shut down and declared a crime scene.

Police initially believed two children were missing, but her younger brother was later found safe and well after spending the night with his grandparents.

"Luckily the 20-month-old child is still alive and wasn't there at the time,'' Supt Martin said.

Supt Martin said the Holden Viva was first spotted about 10.30am yesterday by at least two passing motorists but no one came forward until 7.30pm.

Once police were alerted to Kyla's disappearance, a media blitz ensued to help with their search.

"It's a bit early to speculate on the actual time of death but we would think that it wouldn't be long after the vehicle was first seen,'' Supt Martin said.

"It may not have really mattered the fact that we couldn't find the car when we first looked for it yesterday morning.''

The inside of the vehicle was covered in soot, which will make the investigation more difficult to determine what happened in the lead-up to Kyla and her father's death.

"It's obviously a desperate act of a desperate individual and who knows how their mind was working at the time,'' Supt Martin said.

"But I can't understand how someone can do that as a father, it's beyond me.''

"It's just a waste, all these people dying, but particularly an innocent child like this one," he told a media conference at Gold Coast police headquarters today.

The child abduction alert for Kyla was not issued until about 3.15pm Monday but Insp Trezise said he did not believe it could have been issued any earlier.

He said police could not issue the alert until they had firm information and were also using mobile phone tracking to try to locate Mr Rogers and Kyla alive.

However, he said it was 'completely possible' they were dead before the bodies were found at Robina yesterday morning.

Insp Trezise said evidence found at the unit indicated Kyla may have slept through the double murder.

He revealed Ms Simpson and Mr Rogers had been planning to marry but broke up after an eight-year relationship.

Ms Simpson moved to the Gold Coast recently to start a new life.

The Queensland Police Service said it would provide all possible support to the family.

By:MrNatural from Vic, Australia on May 20, 2011 @ 9:38 am
no idea baz. As usual the source of why bad things like this happen are kept quiet. If the source of every death, act of violence, incident of abuse was reached, you could possibly find the link back to a breakdown in the family, lack of values, lack of support, lack of communication, lack of money, lack of proper system intervention and so on. Too may lacks I'm afraid to be in such a society where it is proclaimed the land of plenty. Something's not right!
1

By:Bazza from Vic, Aust on May 18, 2011 @ 7:06 am
But why?
Yet another FAMILY COURT CRISIS??
What's the background behind this case?
Why would a Father be so desperate to do this? PLEASE EXPLAIN!!