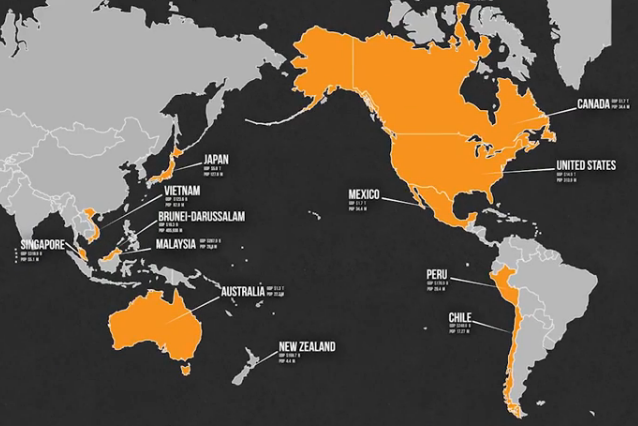 The Abbott Coalition looks set to sign off on the highly secretive Trans-Pacific Partnership later this month, but what will it mean for ordinary Australians?

WHAT SORT of “Trade Agreement” manages to both criminalise internet use and force coal seam fracking onto communities?

The answer to this is the Trans-Pacific Partnership (TPP), a pact that has the ominous potential to achieve both these corporate objectives — and many more.

Of course, we cannot know the exact effects of the TPP, as the negotiations over the past few years have been held in secret. However, two leaked chapters – out of the 26 or more under negotiation – have caused more than their fair share of concern.

One of these chapters threatens to undermine both our existing domestic and international legal systems, throwing away the protections and rights achieved over hundreds of years.

How? Through tribunals linked to a system of International Investor-State Dispute Settlements (ISDS). The one in the TPP led to an open letter signed by prominent Australian judges, lawyers, politicians and academics insisting that the government should not sign an agreement that includes ISDS. The letter states:

'...the increasing use of this mechanism to skirt domestic court systems and the structural problems inherent in the arbitral regime are corrosive of the rule of law and fairness.'

But ISDS is most definitely included in the proposed TPP put forward by United States negotiators.

The Gillard government made it clear that Australia would not sign another trade agreement that included international dispute settlement by tribunals. This followed Australians being burnt by an agreement that has allowed Phillip-Morris to take Australia to an international tribunal over its plain packaging laws, even though our own High Court already decided against Phillip-Morris.

The North American Free Trade Agreement (NAFTA) is being used by gas and oil company Lone Pine Resources to sue Canada over Quebec’s moratorium on fracking. A trade agreement was also used to sue Ecuador for USD $1.77 billion.

Not only that, but it says it will

Tom J. Donohue, CEO and President of the U.S. Chamber of Commerce, told CNBC that the TPP deal will be completed in a month.

Added to the threat of ISDSs are many other concerns, including those raised by the leaked chapters.

For instance, based on the leaked IP chapter, Aaron Bailey of OpenMedia.ca is concerned about the new powers that may be given to massive international media organisations [IA emphasis]:

The TPP seeks, among other things, to rewrite the global rules on intellectual property enforcement that would give Big Media new powers to lock users out of our own content and services, provide new liabilities that might force ISPs to police our online activity, and give giant media companies even greater powers to shut down websites and remove content at will. It also encourages ISPs to block accused infringers’ Internet access, and could force ISPs to hand over our private information to big media conglomerates without appropriate privacy safeguards. You can see a more complete list of new restrictions below, but it appears that the TPP would turn all Internet users into suspected copyright criminals. In fact it appears to criminalize content sharing in general.

A statement by a U.S. trade representative at the recent ASEAN meeting in Brunei said that the TPP Ministerial Meeting held at the APEC meeting in Bali in early October would be a “milestone” and that the aim was to finish the TPP agreement "by the end of the year".

President Obama is scheduled to address the APEC leaders, including Tony Abbott, on October 7.

Before Prime Minister Abbott signs this agreement, Australians deserve to know what rights we may be signing away.

By:Jerry Lee from qld, aussie on April 8, 2014 @ 12:17 pm
Being a Father was once honourable and politicians were lowly public servants which hardly got a mention in the media but generally performed their public duty for the common good in a reasonable manner, plus there was always recourse if they didn't. However for a few decades now it's been the other way round, where Fathers have been treated like the low lifes and politicians and their selected corporate agencies get glorified with magnanimous pensions and benefits with no accountability. WTF!!! What happened? Did I swallow a dumb pill or miss something???

By:Jerry Lee from qld, aussie on April 8, 2014 @ 10:50 am
There is one simple msge to the filthy treasonous rich rats behind the secretive TPP and that is to FUCK OFF!!...... People had better switch on ther brains and become alert to the trickery, deception and further tyrany that awaits those who are asleep and don't make a noise about how the TPP, our shifty politicians and wealthy business leaders like James Packer, $7bn king of nothing wonderful except casinos that kill families and the the fabric of society, will continue to sell all australians down the proverbial river until Australia becomes a barren wasteland tip like some 4th world country banana republic........ Where's our fucking polution free low cost electric cars you moron govt/business leaders!!! If anyone in Canberra had a brain youd be dangereous you wankers!!!