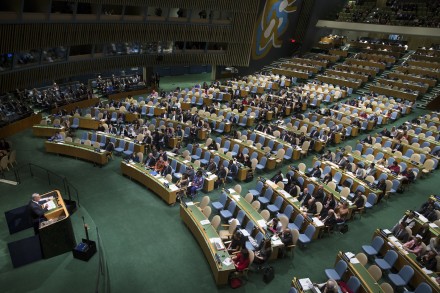 The United Nations in session (PA)

The Vatican’s nuncio to the United Nations (UN) has called for a broad definition of the term “rule of law” that includes respect, dignity and justice.

The rule of law should be “both rationally and morally grounded upon the substantial principles of justice, including the inalienable dignity and value of every human person prior to any law or social consensus,” said Archbishop Berardito Auza, the nuncio, in a statement made during a committee meeting at the UN General Assembly.

“As a consequence of the recognition of this dignity, those elements of fundamental justice such as respect for the principle of legality,” Archbishop Auza said, “the presumption of innocence and the right to due process.”

Among nations, he added, the rule of law should mean “the paramount respect of human rights, equality of the rights of nations; and respect for international customary law, treaties … and other sources of international law. This definition, with its reference point in the natural law, sidesteps self-referential definitional frameworks and anchors the orientation of the rule of law within the ultimate and essential goal of all law, namely to promote and guarantee the dignity of the human person and the common good.”

In September, the General Assembly, following a conference on the rule of law, reaffirmed the rule of law “and its fundamental importance for political dialogue and co-operation among all states and for the further development of the three main pillars upon which the United Nations is built: international peace and security, human rights and development.”

He added the rule of law is “unattainable without social trust, solidarity, civic responsibility, good governance and moral education. The family, religious communities and civil society play indispensable roles in creating a society that can promote public integrity and sustain the rule of law.”

Archbishop Auza said, “It is appropriate to emphasise the commitment of states to fulfill their obligations to promote universal respect for, and the promotion and protection of, all human rights and fundamental freedoms for all. If the international rule of law is to reflect justice, frameworks to international protection of persons must be fairly and impartially applied by states to guarantee equal recourse to the protections available under the UN Charter.”

He specifically mentioned minority populations in the Middle East and elsewhere who deserve protection.

The “responsibility to protect,” Archbishop Auza said, “is a recognition of the equality of all before the law, based on the innate dignity of every man and woman. The Holy See wishes to reaffirm that every state has the primary duty to protect its own population from grave and sustained violations of human rights and from the consequences of humanitarian crises. If states are unable to guarantee such protection, the international community must intervene.”

Archbishop Auza voiced the Vatican’s hope that “the alarming, escalating phenomenon of international terrorism, new in some of its expressions and utterly ruthless in its barbarity, be an occasion for a deeper and more urgent study on how to re-enforce the international juridical framework of a multilateral application of our common responsibility to protect people from all forms of unjust aggression.”