THOUSANDS of motorists are missing out on having speeding tickets scrapped because they don’t know they can apply for an official warning instead of a fine.

Traffic camera commissioner Gordon Lewis on Tuesday highlighted the problem and told the Herald Sun he would do all he could to fix it.

Mr Lewis revealed he will recommend to Victoria Police that all infringement notices be changed to include prominent and easy ways to find details on how to have speeding fines reviewed.

He also wants every speeding infringement notice to boldly display the principal criteria the force uses when deciding whether or not to exercise its discretion to issue an official warning, while emphasising that these are not the only grounds which will be considered.

“It is vitally important that the entire traffic camera system be as transparent as possible and that should include being open about how motorists can apply for an official warning instead of a fine,” Mr Lewis told the Herald Sun. 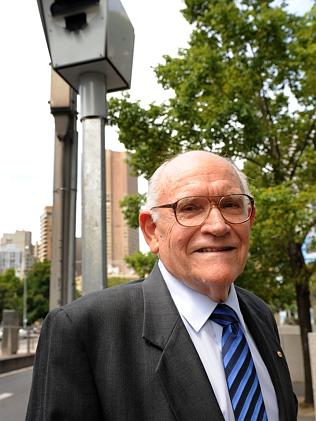 Gordon Lewis is Victoria's speed camera commissioner.
“This information needs to be prominently displayed on every speeding infringement notice. That isn’t happening now and it should be.

“I understand why, due to limited space, the notice can’t list every circumstance that might be considered ‘special’, but all the infringement notice currently tells the person receiving it is that they can apply for an internal review.

“But it is printed on the notice in very small type and I suspect not many people see it.

“And the notice doesn’t tell motorists on what grounds they might be eligible to get an official warning for lower speeding offences, instead of a fine and demerit points.”

Victoria’s Sheriff Brendan Facey and the state’s top traffic cop Robert Hill said it was important that the traffic camera system was as open and transparent as possible to ensure community confidence.

“The suggestions made by the Road Safety Camera Commissioner will be considered during the review that has already commenced in relation to the design of infringement notices,” Assistant Commissioner Hill said.

Mr Lewis said infringement notices were convoluted, cluttered and a challenge to even the most literate in the community to understand.

“While, depending on whether the alleged offence involves excessive speed or running a red light, the alleged speed or elapsed time on red, monetary penalty, demerit points and due date are all clearly stated, the reference to internal review if a motorist feels aggrieved is in very small print and gives as the first option, reference to a web site,” he said.

“Now, I don’t think we can assume that all motorists have access to computers or know how to use them.

“Certainly a third of all complaints received at my office come by post, mainly from older drivers.

“I acknowledge that Victoria Police and the Department of Justice have for some time been reviewing the form and content of infringement notices and I urge them to take my comments on board.

“If the price of transparency requires two pages instead of one, why not? My telephone bill is sometimes six pages.”

By:Johnsie from vic, australia on June 3, 2015 @ 3:04 pm
Don't believe slave propaganda to lull you into a false sense of security. Why not just scrap unlawful penalties completely Mr Lewis? Don't pretend you're the hero + white knight in shining armour when clearly you're not! Always seek proof of claim peoples, especially from these big money businesses aimed at keeping you + your family penniless + in the poor house!

If transparency was a No 1 priority, why isn't a direct email address put on the notice and have someone sign and put their name to the claim against you? All unlawful fictional commercial rubbish intended to control and suppress the populace, whilst giving the directors and investors of such companies plentiful dividends.
Police aren't Police, they are a business like any other.