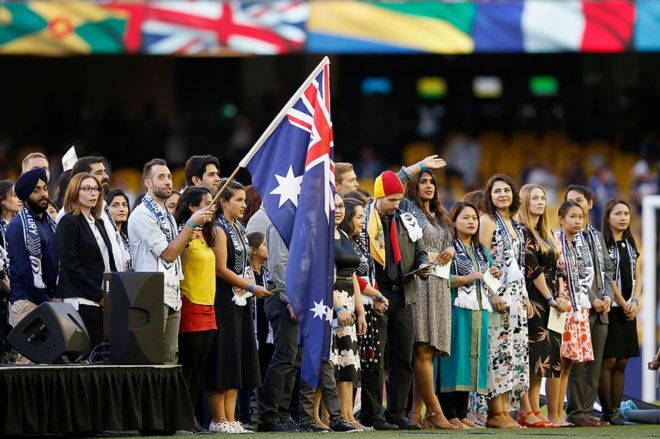 A citizenship ceremony in Melbourne earlier this year

Australia will make it more difficult to gain citizenship in a major overhaul of its migration process.

Applicants must also have completed four years as a permanent resident - three years longer than at present.

Mr Turnbull said the changes would ensure that migrants were better integrated into the community.

"It is important that they understand that they are making a commitment to our Australian values," he said.

What are the changes?

"Respect for women and children ... that is a key Australian value," he said, adding domestic violence would not be tolerated.

Other changes to the citizenship process include:

Providing evidence of integration into the community, such as employment history, school enrolment or membership of community organisations;

Having already been a permanent resident for at least four years;

Allowing applicants to apply only three times, and automatically failing anyone who cheats on a test.

When asked about reports that applicants would be quizzed on whether they supported forced child marriage or female genital mutilation, Mr Turnbull said it was important to "reinforce our values".

"If we believe that respect for women and children [is an Australian value]... then why should that not be made a key part, a fundamental part, a very prominent part, of our process to be an Australian citizen?"

The requirements would apply to all new applications for citizenship, the government said.

On Tuesday, the government said it would replace a controversial visa scheme to make it harder for foreign nationals to work in Australia.

Mr Turnbull said both announcements had been made in the national interest.

"It seems a little odd to me that you would actually ask people whether or not they are going to obey the law when they already pledge to obey the law," said Labor senator Penny Wong.