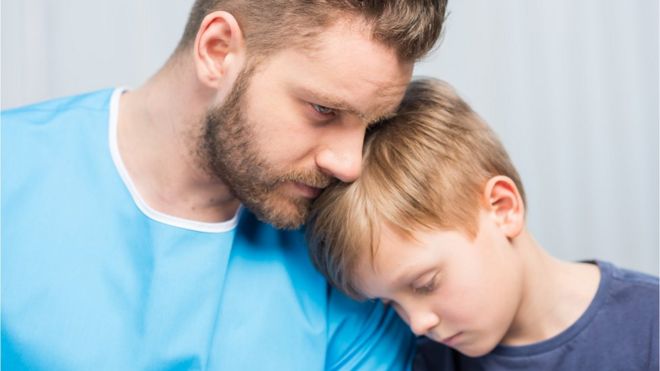 Unhappy father and sonImage copyrightGETTY IMAGES
Image caption
Fathers, as well as mothers, have an impact on children's mental health.
Depression in fathers, as well as mothers, has an impact on children despite mothers often being the focus when treating adolescent depression, a study suggests.
The University College London (UCL) report looked at 14,000 families in the UK and Ireland.
It said both parents had a role to play in preventing teenage depression.
The researchers encouraged more fathers to seek help for depressive symptoms by speaking to their doctor.
Dr Gemma Lewis from UCL, who led the study, said because mothers tended to spend more time with their children, there was often a tradition of "mother-blaming" when treating mental health issues in offspring.
But she said the research showed that "we should be bringing fathers into the picture more".
Dr Lewis added: "If you're a father who hasn't sought treatment for your depression, it could have an impact on your child.
"We hope that our findings could encourage men who experience depression to speak to their doctor about it."
Father hugging his sonImage copyrightGETTY IMAGES
Image caption
Men should seek treatment if they are experiencing symptoms of depression, researchers said.
The study is based on two large samples of the general population - 6,000 families from Ireland and nearly 8,000 from the UK - in which parents and children, at the ages of seven, nine and 13-14, filled in questionnaires about their feelings.
Children were asked about their emotional symptoms and parents also answered questions on their feelings, which were measured against a depression scale.
The results showed a link between depressive symptoms in fathers and similar symptoms in their adolescent children that was similar in size to the effect of a mother's depression.
Many mental health problems, including depression, start at about the age of 13, the researchers said, and although depression in mothers was already known to increase the risk, the influence of fathers' wellbeing was a new finding.
'Negative thinking'
In the home, depressive symptoms can make mothers and fathers more prone to fatigue, more irritable and more likely to argue with their children.
"Children see the way their parents behave and act and this could bring on negative ways of thinking, which could then lead to depression," Dr Lewis said.
The study concluded that fathers as well as mothers should be involved in tackling the problem of adolescent depression at an early stage.
It also highlighted the importance of treating depression in both parents.
What are the symptoms of depression?
They can vary widely but often you will feel sad, hopeless and lose interest in the thing you enjoy.
Normally, it becomes bad enough to affect your work, social life and family relationships.
Psychological symptoms can include low self-esteem, no motivation and feeling tearful.
Physical symptoms can include changes in appetite, lack of energy and disturbed sleep.
Social symptoms may include avoiding contact with friends and withdrawing from social activities.
How to seek help
Go and see your GP if you experience symptoms of depression every day for more than two weeks.
Treatment usually involves a combination of self-help, talking therapies and medicines, depending on the type of depression you have.
Jo Hardy, head of parents services at charity YoungMinds, said parents often wanted to hide their own mental health problems so as not to burden their children but she said it was better "to be honest and open, and give children a chance to ask questions".
"It's important to remember that having depression does not need to stop you from being a great parent. You and your family can still support your child, provide reassurance and love, and help them to do things that they enjoy."