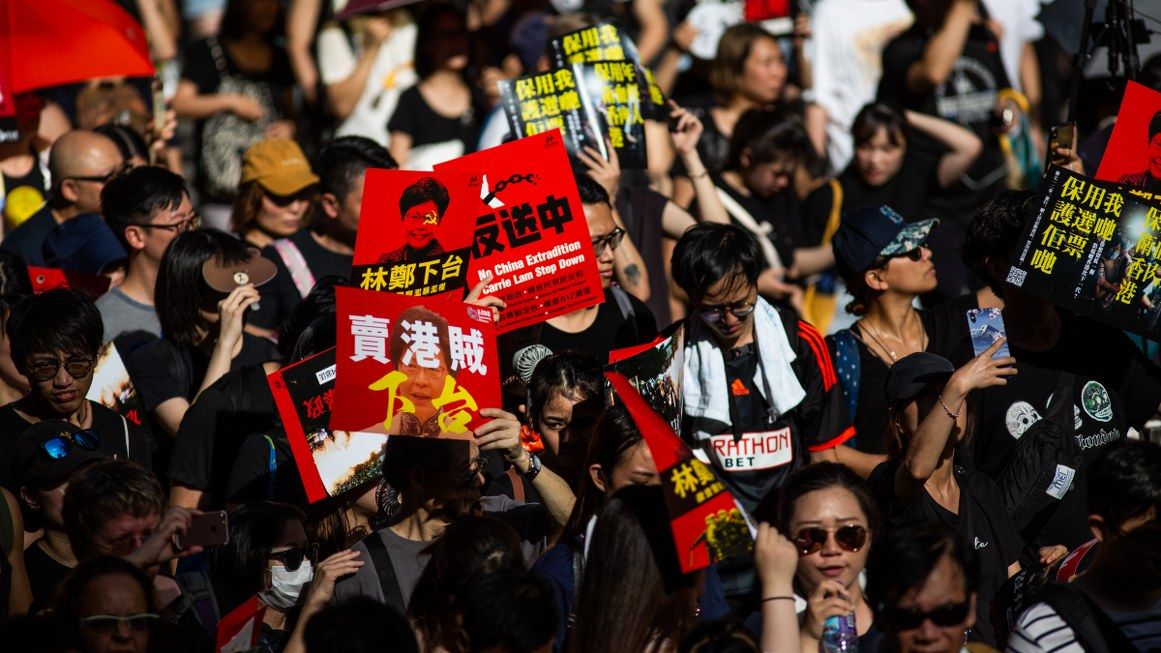 Protesters attempt to storm the legislature Monday while thousands march in protest of Hong Kong's handover to China from the British.

Many digital payments can be tracked, potentially assisting an authoritarian crackdown.

It can be easy to take cash for granted, especially in a wealthy, developed economy. Those fortunate enough to live in a stable society usually suffer no lack of payment options. They are getting more advanced all the time, with financial technology (fintech) companies constantly developing new ways to quickly and cheaply make purchases and send money. It sometimes seems the days of old-fashioned cash, with its dormant physicality, are numbered.

Allowing cash to die would be a grave mistake. A cashless society is a surveillance society. The recent round of protests in Hong Kong highlights exactly what we have to lose.

The current unrest concerns a proposed change to Hong Kong's extradition laws that would allow island fugitives to be transferred to Taiwan, Macau, and mainland China. The proposal sparked mass outrage, as many Hongkongers saw it as little more but a new way for the People's Republic of China to erode the legal sovereignty of Hong Kong.

This week, anti-extradition protests reached another crescendo, as Hongkongers took to the streets again to commemorate the anniversary of Hong Kong's handoff to China, highlighting the deep political dynamics at play.

Specifically, protestors fear that the Chinese judicial system, with all its attendant human rights baggage, would come to supplant Hong Kong's. This would be no small problem. China isn't shy about cracking down on political dissidents, even those from other states under their control. For example, in 2017, a Taiwanese pro-democracy activist was detained in China and sentenced to five years in prison for "subverting [Chinese] state power" in his home country.

So tens of thousands of Hongkongers took to the streets to protest what they saw as creeping tyranny from a powerful threat. But they did it in a very particular way.

In Hong Kong, most people use a contactless smart card called an "Octopus card" to pay for everything from transit, to parking, and even retail purchases. It's pretty handy: Just wave your tentacular card over the sensor and make your way to the platform.

But no one used their Octopus card to get around Hong Kong during the protests. The risk was that a government could view the central database of Octopus transactions to unmask these democratic ne'er-do-wells. Traveling downtown during the height of the protests? You could get put on a list, even if you just happened to be in the area.

So the savvy subversives turned to cash instead. Normally, the lines for the single-ticket machines that accept cash are populated only by a few confused tourists, while locals whiz through the turnstiles with their fintech wizardry.

But on protest days, the queues teemed with young activists clutching old school paper notes. As one protestor told Quartz: "We're afraid of having our data tracked."

Using cash to purchase single tickets meant that governments couldn't connect activists' activities with their Octopus accounts. It was instant anonymity. Sure, it was less convenient. And one-off physical tickets cost a little more than the Octopus equivalent. But the trade-off of avoiding persecution and jail time was well worth it.

What could protestors do in a cashless world? Maybe they would have to grit their teeth and hope for the best. But relying on the benevolence or incompetence of a motivated entity like China is not a great plan. Or perhaps public transit would be off-limits altogether. This could limit the protests to fit people within walking or biking distance, or people who have access to a private car—a rarity in expensive dense cities.

If some of our eggheads had their way, the protestors would have had no choice. A chorus of commentators call for an end to cash, whether because it frustrates central bank schemes, fuels black and grey markets, or is simply inefficient. We have plenty of newfangled payment options, they say. Why should modern first world economies hew to such primordial human institutions?

The answer is that there is simply no substitute for the privacy that cash, including digitized versions like cryptocurrencies, provide. Even if all of the alleged downsides that critics bemoan were true, cash would still be worth defending and celebrating for its core privacy-preserving functions. As Jerry Brito of Coin Center points out, cash protects our autonomy and indeed our human dignity.

We don't even need to contemplate hypotheticals of what a digital financial surveillance system would look like. China's ubiquitous social media and messaging service WeChat doubles as a primary payment method for millions of mainland Chinese. It's easy, it's effective, and it's integrated into every facet of Chinese digital life.

But Coin Center's Peter Van Valkenburgh calls apps like WeChat Pay "tools for totalitarianism" for good reason: Each transaction is linked to your identity for possible viewing by Communist Party zealots. No wonder less than 8 percent of Hongkongers bother with hyper-palatable WeChat Pay.

Of course, Western offerings like Apple Pay and Venmo also maintain user databases that can be mined. Users may feel protected by the legal limits that countries like the United States place on what consumer data the government can extract from private business. But as research by Van Valkenburgh points out, US anti-money laundering laws afford less Fourth Amendment protection than you might expect. Besides, we still need to trust government and businesses to do the right thing. As the Edward Snowden revelations proved, this trust can be misplaced.

Hong Kong is about as first world as you can get. Yet even in such a developed economy, power's jealous hold is but an ill-worded reform away. We should not allow today's relative freedom to obscure the threat that a cashless world poses to our sovereignty. Not only can "it happen here," for some of your fellow citizens, it might already have.