Steven Colley, 57, died in squalid conditions in his home in Kingscliff, on the NSW north coast.

The family of a man found dead in a squalid north coast home claim the NSW Trustee and Guardian ignored years of repeated requests to salvage the property from mounting disrepair.

The body of Steven Colley, 57, was found in an advanced state of decay at his Kingscliff home on June 7, 2018, just two days after his death.

The government body responsible for handling the mentally ill man's financial affairs, according to the NSW Ombudsman, admitted in 2017 that the service provided to Mr Colley regarding repairs on his home was "not to its normal and expected standards".

Now the Trustee and Guardian is seeking a $25,000 administration fee to transfer the title of the home to Mr Colley's cousin, Michael Beehag.

"I thought 'you've got to be kidding', all these years you've done nothing," Mr Beehag told the Herald.

"I complained to the Trust about the squalor that he lived in for a long time."

Mr Beehag, who, through law firm Attwood Marshall, is demanding the fee be waived and the property be released, claims the deterioration of the home contributed to the derelict conditions in which Mr Colley was found dead.

"Where he died was putrid," he said. "They hadn't found his body for a few days."

Solicitor Debbie Sage said there was a heavy breach of fiduciary duty by the Trustee and Guardian and described the $25,000 fee as "unconscionable".

“Over time the condition of the building became worse as the required work remained unresolved which resulted in further leakages and rotting as well as a mould infestation. The condition of the property became a severe health hazard," Ms Sage said.

“It is unfair that they charged fees whilst managing his trust, despite an admission to the NSW Ombudsman of their mismanagement of the trust.

“Due to their consistent and continued failure to act, NSW Trustee and Guardian is directly responsible for the substandard conditions in which the deceased lived at the time of his death."

A Coroner's report, which places Mr Colley's date of death as being on June 5 last year, states that when his body was found in his bed two days later it "was severely altered by the decomposition process to the extent that it was not possible to identify a cause of death". 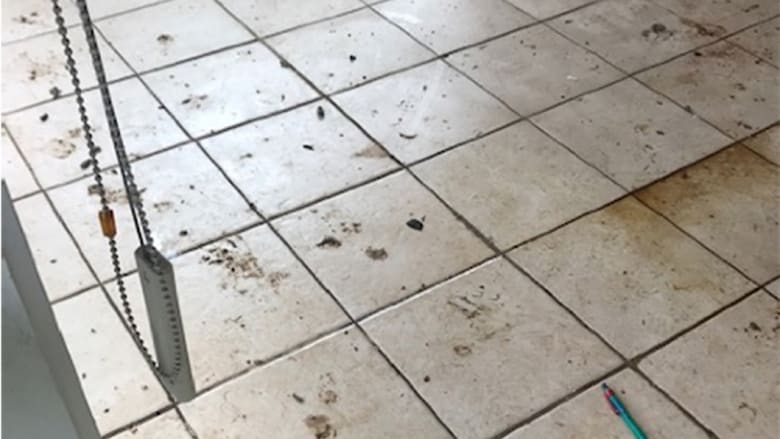 The filthy conditions inside Mr Colley's Kingscliff home.
Mr Beehag, of Coffs Harbour, said he grew increasingly concerned about Mr Colley's mental and physical health and asked police and others to conduct welfare checks on his cousin.

He claimed he and Mr Colley made repeated maintenance requests to the Trustee and Guardian, including regarding water leakage into the sunroom, which he said contributed to the mould infestation.

A November 2018 builder's inspection report seen by the Herald showed the house had an extensive list of major and minor defects.

In a letter to Mr Colley's disability advocate in April 2018, the NSW Ombudsman said the Trustee and Guardian acknowledged that, in relation to roof repairs, it was "clear that the service level experienced by Mr Colley was not to NSWTG's normal and expected standards" with the government body recompensing the trust almost $6000.

In a January 2019 legal letter to the Trustee and Guardian, Attwood Marshall senior associate Lucy McPherson said Mr Colley was charged almost $9000 in commission and fees "shortly after providing the compensation".

The lengthy January 16 complaint also accused the Trustee and Guardian of failing to communicate to interested parties over Mr Colley's affairs and of mismanaging his finances, particularly in regards to excessive water bills.

A spokesperson for the Trustee and Guardian said: "Any information pertaining to the administration of the trust for Mr Colley is subject to privacy laws and the common law duty of confidentiality. We are therefore unable to comment on this matter."