Celebrity brain surgeon Charlie Teo has launched an extraordinary attack on the medical establishment, describing its governing bodies as "the enemy" and accusing the Royal Australasian College of Surgeons of trying to "purge him" from the profession.

In comments that will spark controversy at the very top of Australian medicine, Dr Teo said he will quit if concerns raised by other surgeons and regulators about his fees and methods continue.

The neurosurgeon has been embroiled in a spat with surgical colleagues, the College of Surgeons and the Australian Medical Association over allegations of "a disturbing trend" of his patients crowd-funding $120,000 to have life-saving operations, not peer-reviewing his results and performing 'invalid' procedures. 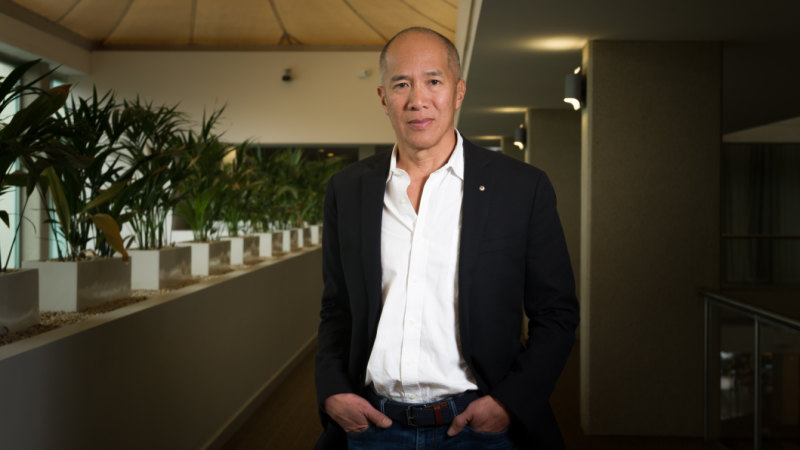 Dr Teo told the Sun Herald and Sunday Age the medical establishment was "gunning for him".

"Once they see blood they go for it," he said. "When the distractions become too great and I can’t give my patients what they deserve, I will call it quits."

The surgeon, who specialises in keyhole and high-risk brain stem surgery, is in demand from patients across Australia, China, India, the US and Singapore.

Dr Teo said "there are times when you just have to bend over and take it up the arse," but said the past week had been the most "relentless and vicious" he had ever experienced and that he did not expect to survive for very long.

"They will eventually get me. I know that sounds a bit fatalistic but I think it is probably true. A lot of good people have gone down to the system," he said.

In an interview on the sidelines of the Health Professionals Australia Reform Association conference in Canberra, Dr Teo listed six surgeons who had resigned, left the profession or committed suicide after being ostracised by other practitioners.

"This is the saddest event I attend every year," he said on Saturday. "My plea is that we all get together. There is strength in numbers. Because the greater enemy is of course the governing medical bodies. We need to fight as a united front so that it is no longer David v Goliath, it is Goliath v Goliath."

The 61-year-old said he was "the best tumour surgeon in Australia," and "even though I know the Health Minister and people in high places and lots of politicians, it means nothing when it comes to AHPRA [the Australian Health Practitioner Regulation Agency] or these lying medical monopolies".

He said the governing bodies used different methods to carry out "a purge" including sham peer reviews, creating a hostile work environment and financial attacks against independent physicians.

"They are vilifying and persecuting me saying that I am nothing but a self-promoter," he said.

Dr Teo said the Sydney Children's Hospital had been "the most vehement and malicious" hospital he had worked in after they mandated all of his patients be sent to intensive care after surgery.

"What that meant is that they could control my numbers simply by saying that there wasn’t an ICU bed," he said.

"All other surgeons could continue having their patients on the ward."

A spokeswoman for the Sydney Children's Hospital said any suggestion that patients were being blocked from accessing services was incorrect and the safety of patients was the priority.​

"Elective surgeries that require a postoperative bed in the intensive care unit will not go ahead unless an ICU bed is available," she said. "This is to ensure patient safety."

Dr Teo said other hospitals refused to take his patients as public patients in intensive care after they had private surgery - driving up their costs. “It has got be against the law," he said. "They need to be made accountable to the same rules."

The controversial surgeon said private hospitals charged $80,000 for the surgery, with $40,000 of that refunded if the patient does not need an extended stay in intensive care. The $40,000 that remains is split between Dr Teo, the surgical assistant, the anaesthetist, the radiologist, radiographer and others. Dr Teo said he made between $8000- $15,000 per surgery.

Of 113 Go Fund me campaigns, Dr Teo said only two were for impending surgeries, while others dated back to 2014, were for travel expenses or other charities.

He rejected calls from the College of Surgeons to sanction specialists who charge excessively high fees and said it was "nobody's business" how much he charges for initial consultations.

"I think a doctor can charge whatever he wants," he said. "If a doctor charges too much and hasn't got a good reputation people are not going to go to him."

Australia’s peak specialist groups have repeatedly stressed that there is no evidence to suggest paying more for treatment equates to a better outcome.

Dr Teo said he did not mind being criticised if he got something wrong but you "can't do invalid surgery for 30 years and get away with it."

"But I don't like being criticised for things that are dishonest. Spine surgeons make so much more money than brain surgeons.

"You wouldn't be in brain surgery for the money."

The Australian Medical Association and the College of Surgeons have been contacted for comment.

By:Gopal Raj Kumar from Victoria, Australia on December 27, 2019 @ 10:08 am
Charlie Charlie, you drink from the poisoned chalice of the chardonay social set and they set you up on a pedestal and worship you for their own causes, then set you up for a fall. Lying with dogs and then getting fleas is the upper class migrants fatal mistake.

Never too late to learn Charlie. Surgeon or labourer you are another pawn in a society that knows nothing about loyalty, mateship or equality, especially if you are from the migrant classes.

You are like many other medical practitioners of migrant stock who rose to the dizzy heights of success in your line of work rubbing the establishment classes up the wrong way in the process.

They have been waiting for you to fall. Thats the Australian way.

Having said that, we are with you. Anything we can do to help let us know. We too can rattle our pots and pans and attack the same establishment that paints you out to be a greedy surgeon (as if you must as a migrant Chinese Singaporean doctor work for free).

Our forefathers created Singapore out of nothing fighting the Brits and Japanese. Stand tall. Keep your head up. Lets see what they do to you first. Then lets go for them.

This is our country too.