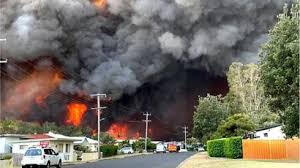 "What starts with 'f' and ends in 'uck'? Firetruck! And the Australian people are currently getting fire-trucked, because before a fire sale you need a fire."

"Apart from Aussies, does anyone else seriously think that Australia's fires haven't been planned?"

Disclaimer- Posting an article does not imply that I endorse its contents. I post opinions and expect my readers to make up their own minds.

WHEREAS the people of New South Wales, Victoria, South Australia, Queensland, and Tasmania, humbly relying on the blessing of Almighty God, have agreed to unite in one indissoluble Federal Commonwealth under the Crown of the United Kingdom of Great Britain and Ireland...

Preamble to The Commonwealth of Australia Constitution Act, 1900 (Imp.)

And again, thank you for publishing the Preamble to the Commonwealth of Australia Constitution Act, 1900 (Imp.). Can you find Queen Elizabeth II in that Preamble? This Act of the Westminster parliament consists of a Preamble, nine clauses and a Schedule. Clause 9 is defined as 'the constitution' and as section 128 of that constitution only permits alteration of the ninth (constitution) clause, Australians can't alter the Preamble, first eight 'covering' clauses or the Schedule to that Act.

The Preamble is the only place where sovereignty is defined and after joining the League of Nations and subsequently the United Nations, Britain cannot and will not alter anything to do with Australia's constitution Act. So who is the Queen of the United Kingdom of Great Britain and Ireland, given that this Kingdom ceased to exist in 1922? Can you imagine the results and flow on effects to New Zealand and Canada as well if this submission was made by the PRC in any international court?

Anyway, Australians, New Zealanders and Canadians are too busy voting in elections to understand why the Chinese government loves Queen Elizabeth II more than any other people on earth, so they'll continue to vote away the soil from under their descendants' feet. Even you must admit that our plans were beautifully organised and executed. Since 2006 and with the plebs doing all the heavy lifting it will take less then a third of a century for all three countries to be Chinese Special Economic Zones.

P.s. Now that Kangaroo Island has been destroyed the mining can start in earnest:

-----------original article
There are huge plans to be put in place in the Land Down Under. The Chinese government and their people will do a better job once they take control and the fires have been of enormous assistance to the Australian peoples' continuing 'gift' of this island continent to the new, Chinese master race. It's not like taking candy from babies. It's taking the world's wealthiest (or second wealthiest) country from a group of retards. Individual liberty is so often and easily curtailed for the common good that order will prevail; not only in Australia.

In terms of huge farms, mines, factories, shipping ports, airports, what used to be our electricity network and wineries Australia, has already been gutted - as were the fire services in last year's budgets.

But Aussies will continue to vote for the two (hand in glove) political parties which form their executive dictatorship. We refer to those parties as a single entity; the LibLab Party. Apart from Aussies, does anyone else seriously think that Australia's fires haven't been planned? There will be a fast train and 'smart' cites (technological prisons for the displaced) along the east coast of Australia and it's cheaper to burn property than buy it.

With a national debt that will never be paid and a narrow export base (coal and iron ore) this country will continue being carved up by the international bankers and the Chinese government. But now Australia's assets will be even cheaper, plus there will be an obvious imperative to keep making necessary sacrifices.

220px-John_Howard.jpg
Prime Minister John Winston Howard (33 degree Freemason) was an enormous benefit to us and the Chinese. He disarmed Australians and in 1997 the Department of Prime Minister and Cabinet added Australia's constitutional problems to the Defence Advisory list of topics the media can't publish. Same in New Zealand and Canada but I'm not aware of the respective dates. This allows us to work without any media attention. Under Howard's watch the World Bank came to Australia in 1998 and priced natural assets like the Great Barrier Reef, the Blue Mountains and various national parks - how many Aussies know that?

Aeonic Magick is inherently racist and white people in Australia, New Zealand and Canada don't deserve the countries they have. We're allowing whitey to prove that. If Australians, New Zealanders and Canadians don't understand the legal, political and economic consequences of the forged signatures of Queen Elizabeth II on their countries' vice-regal appointment documents that's great; because the Chinese Communist Party does! The future will be happy white slaves and the elite. That's what the sheeple want! We intend to give the sheeple what they want because we are the only ones who care. We've never lost faith in the sheeple - "the slaves shall serve".

CHINA(5).jpg
We have all three branches of the Australian military; all politicians, judges, police, public servants and voters on our side. On a practical level, voting enables the power shifts from Canberra, Wellington and Ottawa to Beijing to continue smoothly. These serfs will have proved that they never deserved the countries they lived in. And under Chinese rule, whitey will learn a great deal about racism! There's something sick with whitey. Whitey can't have free and independent nations. Whitey must be controlled by others to feel comfortable. America gave up its sovereignty to become a colony of Israel and Australians, New Zealanders and Canadians are giving up their descendants freedom to the Chinese government. And we will continue to help them to do so.

I think your correspondent Aloysius is premature. Knowing the fate of smart Goy masons who know too much, let us hope that the details of the real story are above his paygrade.

The real question: Is this a merger or an acquisition? Communist China was a ZOGusa operation with Yalie Bonesman Mao Ze Dong. It was between the Rockefeller and the Sassoon branches of the Jewish central banking cartel.

The Rockefellers are one of the majority shareholders in The Fed (owns ZOGusa). The Sassoon branch owned China from the time of the Opium Wars. And they decided that Communism was the appropriate social order for their goy plantation.

The Schiff-Warburg branch which owns the Soviet (formerly the USSR) in the lands of the Russian nation (now largely genocided) directed their Soviet to flood the Maoist forces in China with Warsaw Pact weapons.

Under Rockefeller's orders, the CFR jerked President Truman's chain and he sent General Marshall to China to clean up Chinese nationalist general Chiang Kai Shek and install the Chinese Communist Party through a UN Charter election. Mao won. No surprises there.

And the Maos genocided about as many Chinese as the Soviets genocided Russians. A sizeable portion of the Han population escaped to Taiwan which the ZOGusa had to support or lose all credibility with the Americans as an 'anti-Communist' power.

Now. Australia, a dominion of The Crown - that would be the Crown of the Judaic Supremacy and its empire of The City of London - is owned by the Montefiore branch of the central banking cartel through a Federal Reserve.

So the issue is not about Chinese Communist takeover. We already have a klepto-communist system. More Chinese will be moving to Australia. They will cut through the klepto and just be straight up communist. And their leaders will be scripted to throw their weight around, act like a big deal and make the Australian klepto-communists look incompetent.

How hard could that be? We get this. But the Chinese are also being exported to the Oppenheimer fief in Africa. There might be a billion of them, but China is a large landmass and we are talking about three continents.

By:Joy from Victoria, Commonwealth of Australia on February 22, 2020 @ 11:19 am
https://www.basicfraud.com/videos.html

This is merely one of the things the Chinese government is using to take Australia.