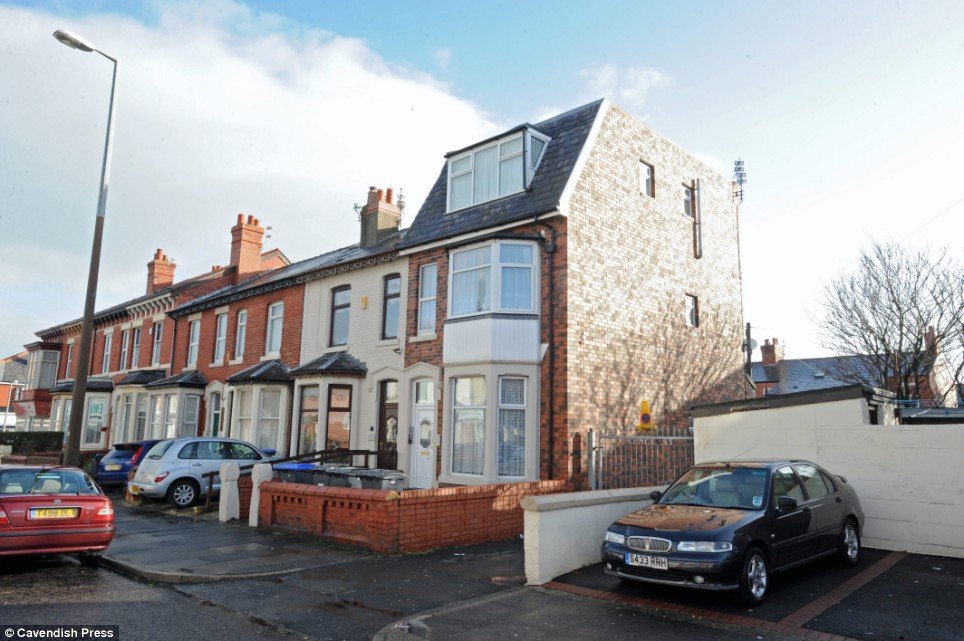 Carruthers and Bates shared a flat in this Blackpool building

The authorities were powerless to prevent them living together on their release because of human rights legislation, Preston Crown Court heard.

The pair, who both have a string of paedophile convictions dating back to the early 1980s, met in Strangeways prison in Manchester and then went on to live in Blackpool, Lancashire.

They used enticements of money and boasts of celebrity connections to lure four 14-year-olds to their ground floor flat in Caunce Street in the resort.

Jailed: Paedophile Stephen Carruthers and John Bates may never be released from prison

Sentencing the pair to indeterminate sentences, Judge Christopher Cornwall said: 'The simple dreadful reality in this matter in my judgment is you are incorrigible, predatory paedophiles.

'You simply cannot resist the temptation of making contact with boys with the purpose of abusing them for your own sexual gratification.

'The harm that you have caused to each of those boys is hard to calculate. What they all have in common is that you were intent on exploiting them and their innocence.

'You have cast a very dark shadow over their early teens.'

Judge Cornwall added: 'I have no doubt you pose an extremely high and significant risk of causing very serious harm to other boys in the future, just as you have done on every single occasion you have been released from prison.

'You are both extremely dangerous. No under-age boy is safe in your company.'

Carruthers was ordered to serve a minimum of five-and-half years in jail before he can be considered for parole after he was convicted of three counts of engaging in sexual activity with a child, grooming and child abduction.
Enlarge

Carruthers and Bates shared a flat in this Blackpool building

Bates must serve at least four-and-half years for committing three counts of engaging in sexual activity with a child and one of child abduction.

However, the judge said he wanted to 'make it abundantly clear' that both were facing lengthy prison terms.

'I do not expect any application for release to the Parole Board to succeed for a very long time,' he said.

Both men were disqualified from working with children for life and must not have any unsupervised contact with children.

The Probation Service and police were aware the men - both on the Sex Offenders Register - were living together but could only monitor them.

Even if the couple are eventually released they will still be able to move back in together under current laws.

Richard Howarth, prosecuting, said: 'The Crown would have wanted an order that the defendants do not reside with each other because it is when they are together they are most dangerous, but I believe that may offend human rights legislation.'

The prosecutors said the pair's victims were lulled into a false sense of security as they were groomed in a 'deliberate and expert fashion'.

Two of the boys met Carruthers as he asked them to look after his dogs while he popped into a shop to buy cigarettes.

He was soon offering them small amounts of money to carry out odd jobs in his flat before suggesting he could give them 'a million pound each' to satisfy his desires.

They also claimed to be former jockeys who knew many famous people and would show a picture of them apparently posing with Sir David Jason in his role as Del Boy from Only Fools and Horses.

One of the victims had learning difficulties which Carruthers exploited to confuse the boy.

In victim impact statements read to the court, one mother said she had 'gone through hell' and that her son was still terrified that the pair would escape from prison.

Another mother said her son had talked of committing suicide and was constantly being teased at school after he told classmates about his ordeal.

Mr Howarth said that boy's family had moved away because of their predicament to get away from the memories the two men had caused.

Carruthers had a history of sex offending that stretched back to 1981. Bates's criminal record began in Newcastle in 1983.

Both men sacked their defence teams ahead of giving mitigation today.

Carruthers told the court: 'My partner and I have been in a relationship for 10 years and in that 10 years together at no time have we got together to plan to abuse any children.'

Both denied all the charges against them but were convicted by a jury at their trial in December.

Outside court, Detective Inspector Tony Baxter, from Blackpool Police's public protection unit, said: 'I am extremely happy with the sentence passed on to these dangerous individuals.

'It sends out a strong message to anyone who commits such offences that when they are caught they will be dealt with robustly by the courts.

'Carruthers and Bates are clearly dangerous individuals and the public needs to be protected from them.

'I would like to commend the young victims for their courage in coming forward and the way they gave their evidence under trying circumstances at court.

'I hope this sentence will be of some comfort to them and their families and I hope that they will grow into successful young men.'