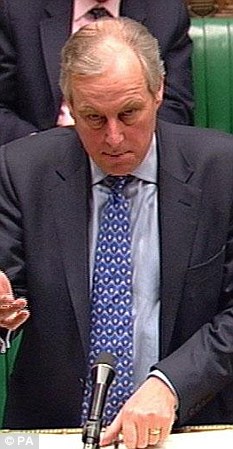 Social workers who forced a couple to give up their 11-week-old baby for adoption have been accused of 'child kidnap' by an MP.

Staff waited until the girl's father was out before launching a raid with police at the family home to 'snatch the baby from the arms of her mother'.

Tory MP Tim Yeo used Parliamentary privilege to make the allegations in the Commons, saying Suffolk County Council had declared the couple to be unfit parents despite having no evidence of physical or emotional abuse.

'This council actively seeks opportunities to remove babies from their mothers,' he added.

'Its social work staff do so in a manner which in my view is sometimes tantamount to child kidnapping.'

In a further claim, Mr Yeo told the
Daily Mail that social services became involved only because the woman's former husband had successfully sought custody of their son previously.

He alleged the ex-husband's girlfriend, who works for Essex social services, had contacted a friend at Suffolk social services and a ' spurious' concern over the mother's parenting skills was concocted around an occasion when she refused to send her son to school.

The parents, who can see their daughter only once a month on a supervised visit, now plan to flee abroad because the mother is pregnant again and is terrified the new child will also be taken away.

Using fake names to protect the family's identities, Mr Yeo said: 'Carissa and Jim have not managed their lives particularly well but that does not disqualify them from being good parents.

'The council could have provided help which would have allowed them to keep their daughter, Poppy.'

Staff started monitoring Poppy after her birth in August last year.
Mark and Nicky Webster fled to Ireland with their fourth child Brandon fearing that he would be taken into care like their other children

Heartbreak: Mark and Nicky Webster fled to Ireland with their fourth child Brandon fearing that he would be taken into care like their other children
Enlarge Three of our children were taken (graphic)


Mr Yeo told MPs: 'The fact that no fault could be found in the physical and emotional care provided by her parents did not deter the council from destroying this fragile family.

'On October 27 last year, council staff - having ensured that Jim would be away from home - accompanied by police, arrived unannounced and snatched Poppy from the arms of her distraught mother.'

A legal battle was raging over her removal, he added, and throughout the process the council had repeatedly changed its grounds for intervening, alternating between blaming one parent and then the other.

'The first doctor's psychological assessment of Carissa declared she qualified for a diagnosis of factitious disorder [formerly known as Munchausen's by proxy],' he said.

'Then a consultant forensic psychiatrist, after the briefest of assessments, decided that she fulfilled the criteria for the much more catch-all narcissistic personality disorder.

'The first doctor assessed that Jim was 'a pathological liar' but later a consultant clinical psychologist 'would not endorse the expression'.

'The final favoured rationale given by social services for Poppy's adoption order was based on nothing more than the possibility of future emotional abuse.'

Simon White, director of children and young people's services, said: 'It is the welfare of the child which must be safeguarded - we reject any accusation otherwise'.

By:Daveyone from London, England on December 2, 2009 @ 2:52 am
Just a thought(It is amazing what you come up with those sleepless nights as you arrive at the 3rd Christmas without your kids!)
http://antimisandry.com/priority-activism/world-4-justice-day-2010-a-25500.html