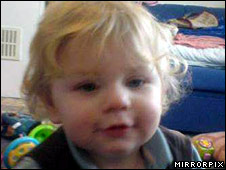 Unannounced checks on children's services introduced after the Baby P case should be halted because they are unfair, senior officials have said.

Baby P checks 'should be halted'

Unannounced checks on children's services introduced after the Baby P case should be halted because they are unfair, senior officials have said.

Ofsted, which is tasked with the inspections, has been accused by children's services directors of using inspectors who are not well trained.

It is believed that out of the first nine councils checked, "serious concerns" were reported in six of them.

But critics say the concerns may simply relate to paperwork errors.

Baby Peter died in 2007 aged 17 months after suffering more than 50 separate injuries. He suffered a catalogue of abuse despite being seen by various health and social care professionals.

The new spot checks began last month but have sparked concern that they are too short to get a clear picture.

The Association of Directors of Children's Services (ADCS) says Ofsted's inspectors are not talking to enough social workers. It wants the checks stopped until these concerns have been addressed.

President Kim Bromley-Derry told the BBC's Today programme: "Some of the language that was being used for the unannounced assessments was confusing and misleading not just for the public but for the local authorities involved.

"Where the comment 'serious concerns' was used, it didn't differentiate between a situation where a child was at risk, through to a minor piece of administrative failure."

He added there had been inconsistencies in the inspectors' ability to look at practice rather than administrative systems.

Timescales mean judgements are based on processes and data rather than on quality of service, the ADCS says.

The directors say they are given an hour's notice before inspectors randomly look through case files and computer systems.

Ofsted say all staff carrying out the inspections are fully qualified and that the two day visits do allow them to observe frontline practice.

Roger Shippam, Ofsted's director of children's services, said: "The chief inspector did get positive feedback from a number of directors of childrens' services who indicated that the inspectors... have been very professional, systematic and sensitive to the pressures on frontline staff.

A DCSF spokesperson said: "Government has made clear its determination to do everything possible to make sure that all child protection services meet the needs of the vulnerable children and we must ensure child protection arrangements are effective everywhere.

"That is why we asked Lord Laming to prepare an urgent report of progress across the country to implement effective arrangements for safeguarding children and asked Ofsted to carry out unannounced annual inspections of children's services across the country."